Last week,  I was privileged to take part in a night of guitars at The Monkey House with a dozen or so other Desio guitar owners. For the past several years now,  local luthier Mario Desio has quietly been building custom guitars for a lucky group of musicians. It was a real treat to see and hear a bunch of these artist-owners discuss and play their very special no-two-alike acoustics. From my little parlor model to baritones and everything in between, it was an inspiring display of artistry and commitment on many levels. Yay Mario! Mario of course, was a guitar player long before he became a guitar maker, and he'll put aside his luthier orders Friday, September 5, to perform at the CD release for his band The Secret Identities at the Starry Plough. More good music — The Secret Identities are sharing the bill with Shelley Doty X-tet (Shelley's a great guitarist & gifted performer) — and another chance to see Desio guitars in action. 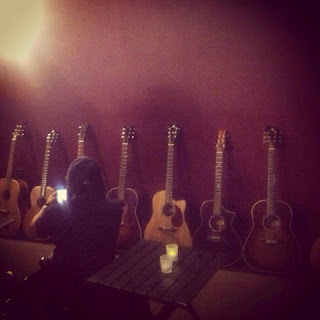