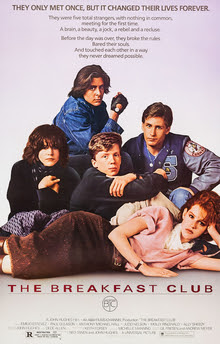 Film Night in the Park is one of those summer events that makes you happy to live in San Francisco, especially when the feature dates back to high school, and you're crowded on blankets with your friends w/Bi-Rite goods and half the Mission District. Saturday night was a John Hughes fest, featuring "The Breakfast Club." I don't think I've watched it since the movie came out (I asked someone 15 years younger than me if they'd seen it before, and they assured me it had since morphed into a cult classic). I see why it held up—the content has plenty of adult implications that I mostly missed at the time—and who can resist singing along to Simple Minds with 1000+ people? "Don't you/forget about me....."
It was that kind of a brain-drain weekend, lazy bike rides checking out different areas of the city, goofball movies, playing a little but mostly mulling. I've one, maybe two more mixing sessions so my big CD project of the past few months is almost complete and suddenly time is more available before the next phase of manufacturing and releasing the tunes. ".....hey, hey, hey-aaaaa....."
Posted by Bird in the Tree at 5:55 PM