Patti Smith @ the Warfield: the art (& punk rock) of forgiveness 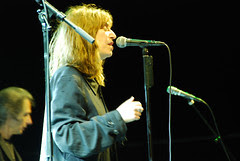 I was supposed to be playing last night, but when an entertainment license snafu at the scheduled venue canceled Plan A, Plan B, Patti Smith's show at the Warfield, was a no-brainer. I left the entertaining post SF Music Tech Summit happy hour with a band from Chico & got into the venue just as Ms. Smith, poet, priestess, and general torchbearer for cool-women-in-rock-n-roll, launched into "Frederick" and it was spell-bind time from then on. No one could stop grinning and shaking their booties as Smith explained the non-tour show. "We were doing some business in Australia, and had flown around the world. We were going to come back through L.A. then I saw it was Rimbaud's birthday, and I said, 'wait, call the travel agent,' we're going to San Francisco!" Smith evidently made a weekend of it, having appeared at the SF Sunday screening of her new Steven Sebring-directed documentary “Patti Smith: Dream of Life,” which won the Best Cinematography Award (Documentary) at the 2008 Sundance Film Festival. Sebring himself even came onstage later in the show to jam with the band on guitar (his "first time" according to Smith and he did himself proud). Inclusiveness seemed her motto of the night, from family, to band, to both real and slightly clueless fans. Incorporating a "what the fuck is wrong with you?" into the second song to scold a rude fan who was not respecting his fellow concert-goers in the front row, she later danced with/in front of same fan later in the set as if to say 'see, it's all cool.'
She covered the gamut of her material including Horses & Gone Again as well as covers of Neil Young's 'Helpless' (with her sons, to honor late-husband Fred 'Sonic' Smith) to Nirvana's "Smells Like Teen Spirit."
More than an hour into the show, after another satisfying rocker (she plays, dances and sings with the energy of a 25-year-old), she said "happy birthday Arthur," with a wicked grin, clearly enjoying herself. Yet, when someone yelled out "who's Arthur?" she didn't take the opportunity to humiliate the person for their ignorance. Nor did Patti remind them of what she'd to start the show. Instead, she paused, then graciously explained that he was a French poet "whose birthday we are celebrating." And thus, commenced to rock that much harder on favorites such as 'Because the Night' and "Gloria." A truly great — inspiring — performer and show on more than one level.
Posted by Bird in the Tree at 2:54 PM

Wow, what a great way to spend some time before departing for India!