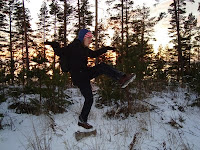 I knew Lasse Hukka was one of the more serious musicians in Mysore when he came over to play and pulled out a Martin guitar he'd carried on the plane to India from his home in Finland. As dedicated to his songwriting practice as he was his yoga practice, I was delighted to have the opportunity to play with him in our Mysore 'Chocolate Stand Band.' I caught up with him post-trip.


Q: How is recording going? Do you write new material at the same time?

LH: I've been recording demos for some time now, hoping to get an album done. I have old and new songs under construction simultaneously, and the ones I don't lose interest in right away, I will work further. Sometimes it takes two years to make the song complete and sometimes one day. It feels like song writing doesn't have a beginning or an end. Usually, by the time I've got something recorded, there are so many new ideas that I can just start working on them. And then, it's all up to my efforts, [whether] I get something done.

Q: Do you find being bilingual that your write in different languages?
LH: Yes, melodies come to me in English. When I was younger I didn't listen the lyrics in the music, no matter if it was Finnish or English. I only heard the phonetics of words and I sang along without knowing the meaning. Anyway, later on, I started to pay attention to the lyrics. To me English language had more magic in it. All the best bands I listened to had English lyrics. Also, a dream of becoming an international rock star started to sneak in to my mind, so I wanted to sing in English too. Finnish language in music often reminds me of a cold realism and dealings in day-to-day life, while English represents mystery and dreams. So I've stayed with the English language.
It can be helpful to know only a little English [and] to have maybe only one option to say the thing you want to say. Sometimes, if you know too many words or too many sayings and stuff, you can drown in the options and lose the point in temptation to show off your English skills. But knowing only a little English can be also be a real pain in the ass. You can never be sure if the sentence is correct or not. You don't have the feeling in the guts about it like you have with your mother tongue.

Q: What was the pivotal point when you said, 'I must play music'?
LH I was around twelve years old. It was a sunny summer day, and a few of my friends and I were hanging out on the back yard of my parents' house. We brought the stereo out and put on the 'Masters of Puppets' CD  by Metallica. Then we played along with tennis rackets and it felt so good that we all decided to start playing rock'n'roll from then on.

Q: Who inspires you?
LH: John Frusciante is my hero and so is David Lynch. It feels that their art speaks straight to my heart.

Q: Have your recent travels changed your writing?
LH: I've only worked with songs that already existed before I went travelling, so I don't know. It would be nice, not to start out with the melody and lyrics and then accompany that with chords, but just make up the lyrics and melodies on top of music. Like that the music in the background would be more than just a background, then it's equally important than the vocals.

Q: Is there a connection between your yoga practice and songwriting?
LH: I try to stay attentive while making music as well as while doing my yoga practice. That is the connection simply.