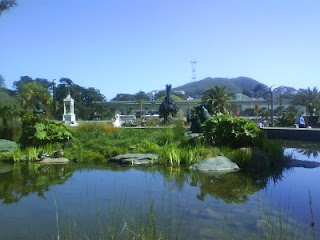 Aaron, Victoria, Lauren & I joined a good number of San Franciscans to check out the Andy Warhol exhibit at the De Young Museum today. I've never been a huge fan of Warhol, though I used to read Interview back in the day when I read things with pages on a regular basis. Nonetheless, it made me appreciate him for being at the zeitgeist of his time and having the ability to chronicle it in a coherent way. But what really made me take pause was the exhibition of his 51 album covers that bore his credit. The fact that he illustrated so many seminal albums alone was stunning; but the subtext of the day was that I was looking at album & magazine covers, many of which pertained to my lifetime, in a museum. Mon dieu! How quickly things become archaic & go extinct. It reminded me to go outside, to see & hear what was happening now. By the pond, between the De Young & the new Cal Academy, (more examples of species that no longer have many places that can accommodate them outside the museum walls either) some real birds – mallards, song sparrows, red-tail hawks & crows for those who can tell the difference – gratefully, were singing. It can be easy to forget these days that the original definition of a tweet is "A weak chirping sound, as of a young or small bird."
Posted by Bird in the Tree at 9:01 PM

Ironic: a weak chirping sound. I think you told me the Dance Mag cover is in this exhibit--yes he used to do freelance work for hire!

yes, I knew someone would get the irony. And yes, it was a Warhol Dance cover!
Fun to text! I had a whole other India subtext by the pond as well but ran out of steam to blog on it. :)