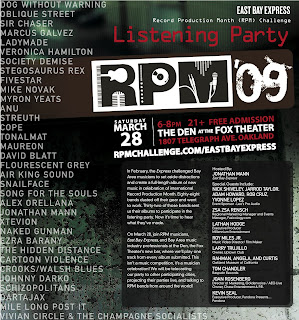 The dust from the flurry of February songwriting has settled and the RPM Challenge is hosting listening parties across the nation to give an ear to all that work. A song from the project I did with Alex Walsh, "Crooks/Walsh Blues"," will be those featured during the East Bay Express produced Bay Area shindig. This weekend, Fox Theater Oakland. Come on down. But rsvp: Jody.Colley@EastBayExpress.com
They will be telecasting the party to other cities, projecting their parties live, and talking to RPM bands from around the world!

www.thefoxoakland.com
Posted by Bird in the Tree at 6:49 PM