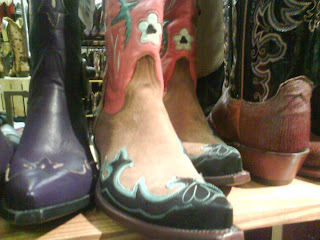 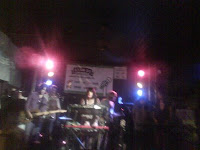 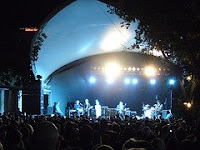 A mid day gig at Austin Java-Parkway kicked off another busy day. Austin Java's are a good example of why Austin is called "live music capital." What in most other town would be your 'typical' popular cafe (with better food) has a regular music schedule, a stage out back plus decent sound AND eager listeners. Austinites simply appreciate music and musicians. It goes a long way. After sharing three shows with her, I'm now officially a Valerie Orth Music fan. Good stuff. And local Patric Doyle gets a big shout out for sitting in on guitar with me all week. Good people.
After the gig, I headed back to the Convention Center, where the tradeshow had been supplanted by a Vintage Guitar Show. Many b-e-a-u-t-i-f-u-l guitars about...and overwhelming. That said, I had one of those only-in-Austin chats with one vendor, Austinite Snakeboy Johnson & his wife Deborah, so I made a pitstop at his Texan blues show which was making a crowd of locals happy at Club 311, as well as at the live.create.lounge to check out the songwriter du jour, The Whole Foods flagship store for a raw food moment, and before heading back to the official showcase action.
Eamon Ryland, who played some of his kickass guitar on Adding Water to the Ashes, has been touring with LA's Juliette Commagere. While the Rusty Spurs stage barely accommodated her 11-piece band, making a soundcheck overlong, it was easy to see why she's also been getting some buzz. Singing lush, ethereal lyrics in a pitch-perfect voice, her music is pop, evocative of Bjork (though more delicate), and with trombone, cello, viola, keys, AND guitar, bass, drums and two backing vocals, both cinematic and orchestral. I'd like to hear her somewhere like Davies Symphony Hall. Speaking of Bjork (who I once did see in Austin, oddly enough), some in the crowd at Stubb's to see PJ Harvey (!) thought the Harvey was turning in another version of the Icelandic singer. I was expecting a full frontal assault from Harvey, but she came out looking demure if slightly alien, dressed all in white with a spiky white 'tiara' on her head. Touring in support of her latest collaboration with John Parish, she seemed more torch singer than punk & while I enjoyed the single "Black Hearted Love," and the band's well-rehearsed, progressive sound...and even PJ couldn't lift me out of my Day 4 fatigue. I called it an early night after a fight broke out in the crowd which shifted the vibe...so sadly, no Alejandro Escoveda (who was in So. Congress area putting on a free show to his peeps) no Perez Hilton Party (my eyes rolling), no last-call new discovery lurking around the corner...capacity had been reached on sensory input. Later, I heard, PJ lived up to her anything-goes reputation and reportedly emitted barks on stage!
Posted by Bird in the Tree at 2:56 PM

I like the boots. Did you get a pair?