SXSW Music Day 3: Mashing it up 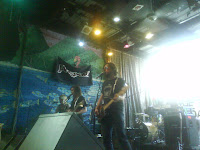 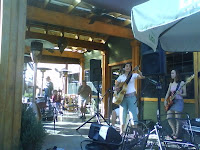 Carlene Cash does not likely care about Twitter, but she's a natural at talking in sound bites, such as "I was in a hurry to get married, I was in a hurry to be a mama, I was in a hurry to get divorced." Funny, whip smart, seasoned and as talented as her storied mother and father-in-law, Cash was interviewed in a large conference room occupied by about 12 people, half of them crew. Every now and again she'd pick up her guitar and sing a tune, making most of in attendance cry for its beauty, power & truth. The through-line of songs has traveled through her country-royalty family,  four husbands, hits & misses, addiction & recovery, and her newest CD "Stronger" is purported to be among her strongest.    Next door, where I split the difference of the time block's two panels in which I was most interested, was a talk on "Social Networks for the Anti-Social" where a crew of social media experts were giving full room of avid listeners their fill of online marketing strategy & tips.  The difference in attendance spoke volumes about the taste of most of the festival goer @ SXSW...(this year's line-up of showcases seems more indie than  roots) and average attentional span.
Post gig at Austin Java-Barton Springs (a patio set, thanks Austin Java), I took a tip from Carter's admitted appreciation of a London radio station that played all genres back to back, irregardless of any 'program' and spent most of the evening hopping from show to show, venue to venue.  I left much of the day's agenda of day parties, gigs, panels and showcases, loose and made some new discoveries: I walked into a Canadian day part @ 12:45 at went whoa, more than free tacos here: Two whit,  Jill Barber . Go to her site.
At another spectrum, Portland's young Viva Voce. Two guys, two girls, two & three part harmonies, a slide electric guitar, looping guitar=ethereal rock
The Toxic Airborne Event Silverlake indie joy club. Great crowd, thick beat, good showmen & woman.
Austin's Black Joe Lewis & the Honeybears Horns, soul & songs about booty got the crowd shaking their's.
Posted by Bird in the Tree at 12:19 PM