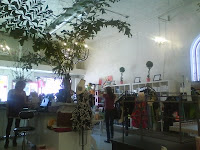 Once you start playing, panel discussions, carefully curated calendars and meal plans go out the window. It's more about getting ready (thanks Pink, the sweet salon on So. Congress, for the nice hairstyle) and across town in a combination of taxi and band member's car, and teaching your songs to people who have never played them before setting up. So was the case for getting to the Green Muse gig in So. Austin (i.e. not on 6th St., the hub of the SXSW festival) Thursday afternoon, where Val Orth, gfire and I played the afternoon slot on the backstage patio stage. I wouldn't get near 6th St. again until 5pm and re-remembered that it's easy to build a full experience at this festival with or without a badge. There is a world of 'unofficial' events going on throughout the city and plenty of friendly Austinites who'd just as soon stay in their neighborhood to see what music comes to them. So Green Muse turned out to be a happy afternoon despite having discovered earlier in the day that Austin is not only the live music capital of the world but the allergy capital of the world. Nonetheless, I got through the set without sneezing & am looking forward to sharing two more shows with Valerie, today & Saturday.
Back on the 'official' SX agenda, two parties and two shows, were 'all' I had steam for Thursday: I had to shut my eyes to all that I wouldn't get too, yes, but couldn't fault my experience of the spirited and Austin-star studded Doug Sahm tribute (which featured The Texas Tornadoes, Dave Alvin & Sara Borges to name some of the man people who crowded stage) and excellent Carrie Rodriguez (whose set-closing rendition of a Spanish song her "great aunt used to sing" was the highlight on my end) at Antone's.
Posted by Bird in the Tree at 11:24 AM

Sounds like you're having a blast and, no, I didn't realize Austin had allergy issues. Good to know.