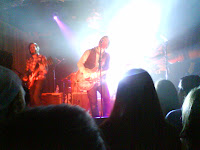 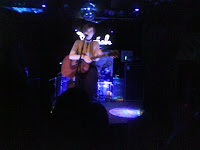 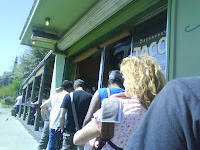 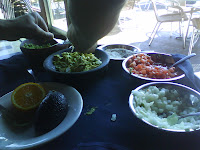 Day parties, BBQs, panels, tacos and artist showcases, showcases, showcases. SXSW ramps up another several notches after the interactive bunch leaves town, making their loud, large shindigs seem comparatively mellow. Still, half of SXSW is realizing limits: you cannot see The Decemberists when you decided to see Dan Auerbach. That compromise, however, is repaid by the random acts of kismet that take over. You meet filmakers in line for the ATM, you find time for a tattoo, you gain a new appreciation for guacamole, etc., et. al. I met the bass player for and music director of Diane Birch, Jay Foote, at Monday's Frissell show & was thus tipped off to the powerhouse soul singer from Brooklyn who I otherwise wouldn't have sought out. Jessica Lea Mayfield happened to be playing before Dan Auerbach, whose band I came to see, at the Parish, and was equally powerful if very different, and definitely had a buzz.
Posted by Bird in the Tree at 12:51 PM

Just discovered Jessica Lea Mayfield the other night on NPR's 100 SXSW sound track. I bet she was great in live performance. Sounds like a great trip.