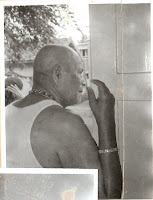 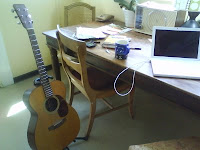 Later, post Memorial Day BBQ, and post spending a few days practice mode rather than participating so much in all the holiday events San Francisco is embracing, I'm going to a local memorial for Sri. Pattahbi Jois, the teacher of the Ashtanga yoga practice I've been doing for almost a decade, who passed away earlier this week. It's fitting given that its Memorial Day, which usually means a party as much as a tribute to those who died in defense of their country, as so many of the lessons I learned from Jois involve continuing on with one's practice (which after a time, I began to view as one's existence) despite obstacles & strife. He's perhaps best known for his pithy (frustratingly so, to some) sayings such as 'practice & all is coming' and 'yoga is 99% practice, 1% theory.' As I've gone along thus far in this life, I believe more and more that these sum up living life as well as you can. That is, if you take action, with faith, making adjustments & refinements, along the way, you've got it! (even if it's not always happy or lovely)
The truth of these sayings hit me the most squarely in 2001 while practicing with him in New York. I'd flown out to participate in one of his American workshops a few weeks after my father, a war veteran died. Three days in, we students walked out of practice and into the terrorist attack that was 9-11. Despite seeing the Word Trade Towers fall, despite more than half the class leaving the city or unable to reach the studio in the following days, and despite his very real option to get the hella outa dodge, Jois kept teaching his practice. Instead of counting myself unlucky for being 'stuck' on the smoky, siren-filled Lower East Side, I counted myself very, very fortunate to be among the few who could continue learning from a master just how transformative practice really could be, even in the simply showing up another day to give it all another go. It was when I really got that both great & not-so-great things can and will happen and while achieving goals is great, practice, whatever the form, is it.
Posted by Bird in the Tree at 5:23 PM