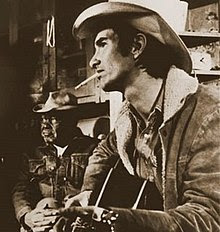 One of the lifetimes ago, while living in Boulder, CO, I attended a live recording of etown, the environmental & musical variety show that airs on NPR stations across the land, and saw one of those truly great, late and flawed artists, Townes Van Zandt perform. Looking older than his age, (then not-yet-50 years), he moved a bit slow and seemed almost shy on stage. At the time, the live etown broadcasts at the Boulder Theater were cheap to attend: the show was fairly young and rough around the edges (as was I) but my equally young (and now ex) husband and I used attend as often possible, regardless of who was playing, as much because it was something we could afford. We soon realized that our few dollars were worth every cent. Co-host Nick Forster, a fine musician in and of himself, books great acts sandwiched between environmental information and special-guest interviews, and I would see memorable turns by Ani DiFranco, Bruce Cockburn, Richard Thompson, Jane Siberry and The Crash Test Dummies. However, I was ignorant of Van Zandt before seeing him on the etown stage. So I didn't know what to make of the skinny, possibly inebriated, musician who, nonetheless, was afforded great patience by etown's cast and crew. I don't remember what he played (and sadly, the etown show archive has a big gap between 1991-2000 which more than covers my years in Boulder!), but Van Zandt got in with me that night, despite my ignorance and my judgement. Weakened by years of substance abuse, he would die within a few years of the show. Since then, of course, I've realized that many my heroes and heroines of the music world have routinely covered his songbook: Lucinda Williams' version of 'Nothin,' EmmyLou's as well as Willie Nelson's oft-heard versions of "Pancho & Lefty," and how fortunate I was to see&hear him in the flesh. Another album of covers of Van Zandt, "Townes," by another influential troubadour, and friend, of Van Zandt's, Steve Earle arrived in the mail yesterday. Listening anew, I'm reminded how powerful a good & true song can be. Funny, I was thinking about etown not long ago. I only went once and it was a lot of fun (much more so than the recent Prairie Home Companion I saw). Were you with Tom and me the night Steve Earle played Bottom of the Hill? I'm not making that up, am I?

etown was great! I was happy to see it's still going on... I wasn't w/you and Tom to see Steve Earle at Bottom of the Hill (tho I believe we may have gone to a Freak Accident show together there). Only seen Earle at several Hardly Strictly Bluegrass events. He lives in the West Village now btw