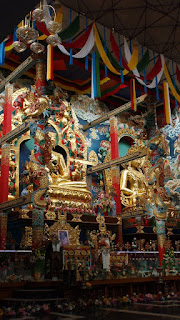 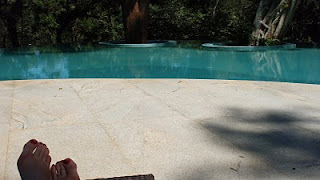 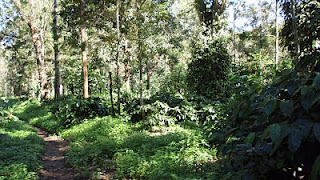 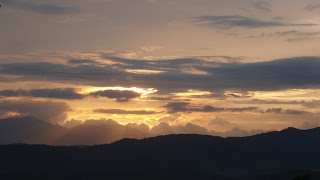 While I've barely been a week in Mysore, a long weekend break from yoga class yielded opportunity for a bit of a get-away. Three other yoginis and myself booked a car, two rooms and some spa treatments at Windflower Spa & Resort in Coorg, about 100km east of Mysore with a side trip to the Tibetan Buddhist settlement of Bylakuppe. Bylakuppe is the largest Tibetan settlement outside of Darmasala, and 7000 Tibetan monks call home. We were there in time to hear the monks practice their chants in the impressive Golden Temple.

Coorg is often called "the Scotland of India" for its rolling hills and lush vistas. While the history of Coorg dates back to as early as 888 AD, the Windflower has been open in this location about two years, and while it may still be somewhat of a local secret, we enjoyed attentive service, some great spa treatments and massages and an abundance of food. Serious. Three meals in an open air restaurant overlooking the pool included about everything you could think to order off an Indian menu and then some. Drip coffee, fresh watermelon juice, dosa.....yum.

Set upon 25 acres of hilly coffee plantations, the resort was remote, quiet and filled with birdsong. We were told elephants lived in the area as well, which I would have loved to have seen, but didn't. Nonetheless, in the morning we toured the plantation of Arabica and Robusta coffee plants. About a month away from harvest, we were able to see plenty of coffee beans ripening on their vines as well as some colorful birds I'll have to look up, an impressively large spider and yikes! leaches! Our guide thoughtfully told us to inspect our shoes in the nick of time.

Playing the tourists that we were to the hilt, we ventured down to the nearby town of Kodagu in the evening to visit 'Raja's seat' an impressive overlook of panoramic valleys and mountains. Evidently, it's where former royalty (tombs of the Kodagu kings Lingaraja and Doddaveera Rajendra are also found here) would gather to witness the sunsets and we followed suit...and were duly impressed. We also picked up some chicory enhanced local coffee in town from a very popular vendor at Coorg Coffee Works who patiently explained roasts, chicory blends and making coffee in the Indian coffee makers he sold.

Our final day at the resort was reserved for spa treatments, each of us opting for a different form of Ayurvedic massage and/or facial. A few hours later, we set out for Mysore under a big full moon, thoroughly relaxed & nourished.

Sounds wonderful, Deb. Happy to get this report, thinking of you out there in heaven.k

Thanks Karen! Miss you