India: Always Something to Celebrate 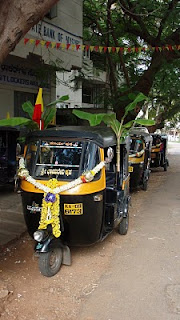 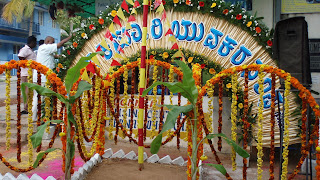 I missed Diwali, the 'festival of lights' and most important Indian festival, by a week or so. A cause of major celebration, Diwali is celebrated with great enthusiasm by residents. But I missed the earthshaking firecrackers and complete chaos of lights and lamps and exploding bottle rockets that fill the streets each evening this year. Still, it seems there's always cause for a celebration, at least in Mysore. Sunday, there was a small festival whose honorary deity or event I never quite grasped, that saw the town's rickshaw drivers dressing up their vehicles in flowers, palm fronds and banana leaves, and locals setting up shrines and stages in front of banks and down side streets. It meant a cancelled afternoon outing due to a dearth of rickshaw drivers and a hard night's rest as a combination of live acts and tracks blared late into the night. Likewise, some folks evidently kept some of those Diwali firecrackers for such an occasion. All well and good for the local residents but a little distracting for foreign yoga students who had a 4:30 a.m. led class. Thank god for strong chai.
Posted by Bird in the Tree at 7:44 PM