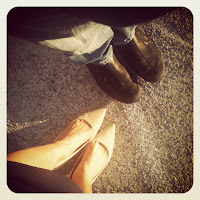 Despite my many comings and goings, the San Francisco Bay Area has always been home. But it took me a long time to admit that: My process has involved lots of taking off to see what it might be like out there, elsewhere. The shadow side of this curiosity is the addiction to the short-term excitement of taking off to new and exotic places and the 'hey, I'm back' novelty of returning. Not to mention the continual adrenaline of figuring out the who-what-where between trips. Last year, however, I did two things that were radical for me, if actually completely ordinary: within six busy months I got married and bought a house. With these two commitments, I gave my word to really seeing and being where I am. Which of course is the point, and the call, no matter where you are (and, well, everyone figures this out at a different rate). While it's not that I'm not thinking of elsewhere, or planning on going other places anymore, my internal perspective has probably shifted as much in the past year as it has in the last ten.  Staying, I tell you, allows you a whole new regard.
Read: "The Mountains of California" by John Muir. Last week, we played a last-minute gig at a cozy Berkeley neighborhood restaurant, The Westside Cafe. On our break, the friendly staff plied us with fine glasses of wine and food* and discussed local music. Somehow, the conversation turned to Martinez, a town north of here, a little east of the SF Bay on the San Pablo Bay. It's home to a handful of music clubs as well as a whole lot of history I hadn't quite grocked — think Pony Express and California Gold Rush and you start to get the idea. So we drove up there the next day and found, lo, naturalist John Muir's mansion and former ranch. I read oodles of John Muir's writing about the Sierra Nevada and his role in the conservation movement while studying natural history at UC Santa Cruz, but somehow failed to absorb that he settled down...in Martinez, living and writing there 'til his death in 1914. We enjoyed wandering the rooms— including Muir's book-filled study— of the stately mansion on the hill, before heading for a nature walk of our own along the Martinez Regional Shoreline.
Eat: Artichokes have always been my familiar. My dad grew them. They covered (and still do) the fields on the coast north of Santa Cruz. While they seem like the could be native to California, artichokes owe their roots to North Africa, have been cultivated in Europe since the ancient Greeks, and came to the US with French immigrants, reaching California via Spanish immigrants. But until I reached adulthood, I really thought they were disgusting. But now...a roasted artichoke with a glass of red wine is among my favorite things to eat.  Simple. Good. Good for you. (Did I mention, Westside Cafe had them on their menu? Good call).
Listen: Vintage Jackson Brown, "Stay" which is about going as much as staying, and how for musicians, well, wanting to stay, and play, and go, are all mixed up... another old song that keeps on giving.
Posted by Bird in the Tree at 9:14 AM