I'm not here for work or to play, rather I'm in Portland on a bit of a lark while my S.O. works. A wintry, rainy Northwestern city might not be the first choice to visit if you're feeling under the weather, but Portland is hardly a place with which to find fault. Portland really is cool, figuratively as well as literally. As we're staying downtown, I spent my first day in the area and The Pearl District, enjoying some R&R and literary inspiration.
Yoga Pearl: Located, fittingly, in Portland's Pearl District, Early morning Mysore Style Ashtanga class is followed in quick succession by led Hatha and Vinyasa classes with some Yin Yoga and Restorative classes for good measure. The serene studio also boasts a Wellness Center and one of the best smoothie & juice bars in town...

Prasad: I'll go to Pearl for Prasad alone. Veggie bowls, healing elixrs, an extensive juice and smoothie menu. If the Wellness Shot (ginger juice, lemon, cayenne & echinacia straight up) I took doesn't cure me, I don't know what will. Especially since I chased it with Blackberry Kiss smoothie made with Oregon's own Marionberries. Yum and OK, now, I could look at books. 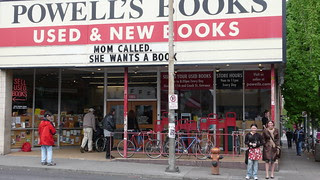 Powell's City of Books: Lest anyone think that no one reads actual books anymore, Powell's City of Books spans a city block and  keeps its shelves stacked high with seemingly every tome known to humankind. The largest independent new and used bookstore in the world has color-coded rooms that help you locate your area of interest. There's also a downloadable app that guides you turn by turn through the stacks if you don't want to ask one of the stores friendly book loving staff. It's hardly my first visit, but...wow, I'll say again. I whiled away a couple of hours here, decided on my purchases while reading them over coffee — they let you bring up to 5 books to browse into the cafe — bought the latest Alice Munro collection and re-remembered about 10 titles I want to/need to read.


Ok, about that D. That would be for Ducks. As in Portland Ducks, who I have to say I haven't been following. Nonetheless, I met self-proclaimed 'the biggest Duck fan' on the planet, a gentleman who was flying back to PDX via AZ where the Portland Ducks took the Fiesta Bowl. The birder in me eclipsed the football 'fan' and had to ask what kind of duck is a Portland Duck? Not a wood or a mallard or a whistling duck but a 'Donald-type Duck' I was told. A Disney Duck, was the general conclusion. In any case, congrats to the Ducks!
Posted by Bird in the Tree at 5:01 PM