The little and not so little things 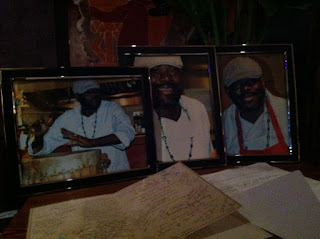 A week ago we visited the Monterey Bay Aquarium  which, with its incredibly groovy displays of sea horse, jellyfish, deep sea tanks and penguin habitats, was even more awesome than I remembered. Amid watching one of the feedings — sea turtles and sardines, loggerhead sharks and tuna, oh my!— I lost my the favorite knit hat I wear when I'm cold. One of those garments that isn't particularly expensive but just works for your life. Nonetheless, the lovely Aquarium staff found it a little less than a week later and sent it back (for free!) so that I had it Saturday night, just as we were heading out for a night sail. It was a warm weekend here in Alameda and the SF Bay has been especially sparkly with the new Bay Lights display. So while we were warm on the boat on Saturday, our hearts were heavy: we'd just heard that Soliel Banguid, of Soleil's African Cuisine, had passed away after suffering a very unexpected stroke.
A few months before Kwame and I were engaged, we happened into Frog and Fiddle on Webster St to check out the music that was playing that night. When we saw the pan-African menu our eyes widened. Kwame is Kwame because he spent several years as a child in Ghana, and it's very rare to see the kind of African food on a menu that Soleil's offered in the States. Let alone an African kitchen in a place in Alameda that routinely features folk music. Excited, he ran over to talk to the owners, Soleil and his wife TJ, and like nearly every person who encounters the couple, formed a warm connection with them. They had recently taken over the kitchen at Frog and Fiddle and in a short time, word got out that some special people were serving extra special food down on Webster St.
So it was a no-brainer when we were planning our wedding to ask Soleil and TJ to host our wedding reception. They were unbelievably gracious and sweet and easy to work with, and our guests loved them and their food as much as we did. You couldn't help but feel good around these two good, good people who shared the best of themselves. We just thought the world of them and were excited, in the ensuing months, to see the restaurant that much more crowded, and them enjoy more success and appreciation from the community and get favorable reviews from the press. In February, when I ran into them at Zinfest, where they were pairing their food with R&B Cellars wines, TJ came around from where she was working to give me a hug amid the crowd. And Soleil paused long enough in his work to flash a big smile and ask about Kwame. It was the last time I saw him.
We stopped into Frog & Fiddle on Sunday where a group of Soleil's friends had gathered to pay respects and find out more about what next. Someone showed us a video of Soleil drumming at a birthday party just a month ago. In the video, you see TJ join him on percussion midway through his solo and, again, they both just exude joy and bright light. Thank you Soleil. Heartfelt condolences, TJ.

A larger memorial is being planned as is a system of making donations to help defray medical and burial costs.
BENEFIT UPDATE: Chef Soleil Banguid Benefit and Traditional African drummers in Alameda, April 12 http://www.brownpapertickets.com/event/366697