I once spent the better part of a trip to Europe seeking out empty churches to sing in. Most of the churches in Europe, of course, are ancient, cold, drafty, and have high ceilings, yielding great acoustics and ample reverb. At the time, I'd done some singing workshops with Chloe Goodchild, a wonderful artist and educator who teaches her own Naked Voice technique, which is "dedicated to the transforming practice of  self-awareness and conscious communication skills, through spoken and sung voice." Rooted in indigenous wisdom, spiritual and classical Indian music masters, Naked Voice singing is primal, authentic and liberating. Spurred by those workshops I'd done with Chloe, I'd go into those old European churches, open my mouth and just see what came out. 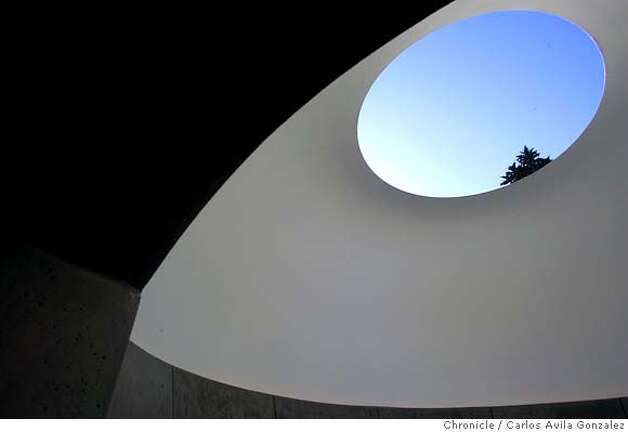 Chloe is based in the UK, so I haven't kept up with Naked Voice practice, but my exposure to it provided much fuel to keep going with singing and songwriting, and eventually, performing.
Now more taken up with traditional lyrics and songs, I don't sing in empty churches much anymore either. And I'd almost forgotten about Naked Voice until last night, when we spontaneously ended the week with a visit to the De Young Museum in San Francisco.
Friday nights at the De Young are a party and last night a swing band was presiding over a rollicking dance floor when we arrived. It was the first time I'd been to the museum with Kwame, though, and I wanted to make sure we got outside to the sit in the Jame Turrell Skyspace "Three Gems," a piece commissioned when the museum opened which is almost hidden in the sculpture garden. Turrell, like Goodchild, is really working in big mind. He does with light what Goodchild does with voice: his spaces are at once meditative, transporting and energizing.  Three Gems is a subterranean stone installation in the form of a stupa (a dome shaped shrine derived from pre-Buddhist burial mounds in India) with a circular opening in the ceiling. It's as sacred a space as any church, adding up to a unique audio visual environment. We stood in the middle of the space and spontaneously began to vocalize, hitting the resonant frequency and making sound to match the light.  Of course, a bunch of children came into the Skyspace while we were vocalizing to see what was up and join the party, which resulted in all sorts of authentic sounds. It was lovely and spontaneous and primal, and a perfect way to start the weekend.