In a few days we'll be in the desert. No it's not the best time to be heading through one of the hottest places in the world, but there' nothing so clarifying as a good sweat, a sun-baked sky and a wide horizon. I thought this on Tuesday while practicing yoga in LA during the West Coast's heat wave, trying hard not to slide off my mat, having driven down highway 5 the day prior. Pasadena is stop one of our vacation/tour/friend&family jaunt through the Southwest and Rocky Mountains. Pasadena is also the birthplace of my artist crush of the moment, James Turrell, whose retrospective at the Los Angeles County Museum of Art opened at the end of May. Turrell is obsessed with light: light as form, light as experience, as much as light as a tool. I wrote about my love of his Skyspace at the De Young Museum a few weeks ago. Gladdened by the opportunity to see a retrospective of his work, I toweled myself off after yoga and made my way to the heart of LA to view a career's worth of his projections, holograms, and rooms filled with light.
LAMCA wisely limits the number of visitors who can enter at once (my ticket came with an allotted time of visit) so as to maximize the works' powers of altering perception. The immersive, full-room light installation - Key Lime, Breathing Light - held the most power for this viewer, placing me in shifting lightsapes evoking dreams in the former, the experience of weather changing on a mountain in the latter. In two videos featuring the artist discussing his sky spaces and his Magnus opus, The Roden Crater in Arizona, he mentioned his interest in inviting the viewer not only to perceive, but to see themself perceiving. In almost every case I had the feeling of having entered a divinated space, a nondenominational church of light, a testament to Turrell's unwavering focus and clarity of vision. The videos, photos and sketches of the works he's creating at Roden Crater were worth the price of admission alone. God love a mad scientist realizing his vision. 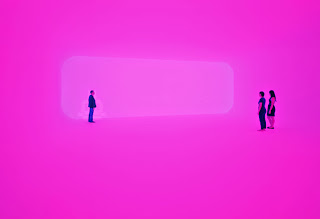