Artist Interview: It's All Happening for Robin Yukiko

Running a songwriting workshop, teaching voice and piano, and generally impressing listeners with her stellar voice and high standards for composition, singer-songwriter and pianist Robin Yukiko quickly established herself in the San Francisco music community when she moved to California four years ago after stints on the East Coast and in Japan. As she prepared to release her new CD Love-War, she answered some questions about her musical background, recording her latest project and her next move.
Q: You were raised in a musical family and have lived and performed all over the world — how and why San Francisco? 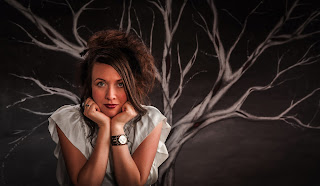 RY: Yes, my father is a jazz pianist and my mom has a killer ear for production. They were incredibly supportive while I was growing up (and still are) and encouraged me to follow my dreams, wherever they took me. I grew up in Orlando, a town that is just diverse and touristy enough to make you want to see the world. And spending time in Boston (where I have family and went to college) only fed my travel bug. But the turning point for me was, after graduating Berklee College of Music, deciding to teach ESL in Japan. I thought it was a great way to kill time, make money, and see the world. I had no idea I would fall in love with teaching and meet my future husband, a fellow teacher. After about two years, we were both starting to feel the strain of living abroad, but also the call of our future careers (for me, music; for Greg, astrophysics). When he got into a Masters program in San Francisco, it was perfect. I've been loving getting to know the SF music community and being a part of it.
Q: You're working on a new recording. How did you go about choosing songs and who to work with?
RY: About eight years ago, I started recording what I thought would be my second album. But when the engineer transferred the files with a faulty cable, all the master tracks got corrupted. I was pretty heartbroken. I didn't try to record again until I came back from Japan in 2009. I spent a couple months in L.A. where I reconnected with my old band mates who had moved, and met Cori "Master Fader" Jacobs (an awesome musician/producer/engineer). I started piecing the new songs together track by track, thinking it would get done that summer, but issues kept cropping up. When I lamented to the friend I was staying with, he introduced me to his neighbor Will Kennedy (former drummer for the Yellowjackets). I got down a handful of killer drum tracks before I had to head to San Francisco. I continued things here, recording at the Musicians Union studio with Patrick Simms, and met some new musicians who were into the project, like Colin Williams, Jason Craven, and Elyse Ader (upright bass, electric bass, and viola respectively). My good friend William Ryan Fritch (a multi-instrumentalist I played with in Florida) added his orchestral touch to a few songs. We were still recording one track at a time, and all the while I was writing new songs that I wanted on the album. It felt like a picture I kept painting over as things were revised and my style evolved. I was running out of money too, and decided to do a Kickstarter which raised $2600. I was able to put out an EP version of Love War and give it to my Kickstarter supporters while they were waiting for the full album. I managed to make it back down to L.A. (hooray, Megabus!) and worked directly with Cori. In just a few days we finished up the entire project and created something I'm finally proud of.
Q: How did your songwriters' workshops evolve? Do you find teaching influences your writing?
RY: Well, I've been accused of being impulsive (and there's some truth to that). When someone suggested I teach groups, I scheduled the first workshop for three weeks later, started hitting up open mics and telling everyone I met about them. I remembered a class at Berklee called Singer-Songwriter Workshop that was so good that I took it twice. I wanted there to be a group that could give honest and useful feedback (and be affordable to musicians). It started out with only a couple people, but word spread and now there is a small, but consistent group that provides invaluable insight to its members. After doing these for a while, I started to develop a philosophy and began writing articles for MusicClout.com. You can also find them in my blog at www.robinyukiko.com/news, but I encourage musicians to educate themselves as much as possible.
Q: Gazing into your crystal ball: What do the next 6 months look like for you?
RY: Well, I am thrilled to say that I will finally be releasing Love War on July 27 at the Hotel Utah! I'm putting a set together of my favorite songs from the album and will be rocking out live with the band. A week after the launch though, I'll be moving to Pennsylvania. I'll continue to perform online when I get there, but live gigs will be a challenge for a while as I'm also expecting a baby in November! But so far I'm doing my best not to let being pregnant affect my gazillion summer projects. I keep thinking of my favorite line from Almost Famous: "It's all happening!"
Posted by Bird in the Tree at 10:00 AM