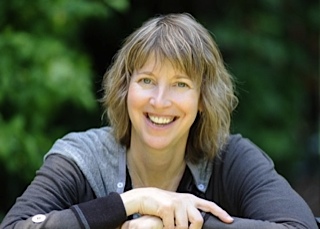 I was recently introduced to fellow East Bay-by-way-of-Southern-California songwriter Sara Lovell through the 27 Powers writing community. A songwriter, multi-instrumentalist and producer with a wide-ranging musical palette, Lovell moved to Berkeley from Los Angeles several years ago with three critically praised full-length CDs of multi-layered modern rock and folk/pop songs to her credit, and a desire to become a parent. As her son begins his fourth year and she shifts more of her focus back to music making, Sara discussed her influences, balancing writing life with motherhood and getting back to recording and performing

Q You've taken a little break — are you finding your writing changing post-LA and post-parenthood? Have you found Wild Writing practice influencing your material in new or different ways?
SL I wouldn’t quite say, “post-parenting” yet. My son is still three and I hear this job goes on for quite some time. The biggest challenge at the moment is going from having more open-ended time before my son Gabe came, to now having to fit the writing into shorter, more scheduled blocks of time. And as a former night owl, I now aspire to meet the muse at 2pm instead of 2am. Wild Writing was the perfect practice at just the right time since it was the first opportunity I had where I gave myself extended time each week, just for me, to feel whatever was there and express it in words, in a safe, honoring group of women. And to be so moved and inspired by the other writer’s experiences and words...to be reminded and grateful for this wild, precious life.

Q Who do you count as your main influences and who are you listening to now?
SL I grew up listening to lots of different music thanks to my parents and older brother and sister.  I heard a lot of classical, some jazz and bossa nova, Ella Fitzgerald and Harry Belafonte to name a few. Then came the Beatles, Motown, Stevie Wonder and the singer/songwriters—Joni, Carole King, James Taylor...When I started composing on the piano I was aware some musician’s music felt so kindred to me, like hearing a Todd Rundgren song for the first time when I was 12 and saying, “Hey I just played those same exact chords yesterday!” And hearing the last movement of Ravel’s Mother Goose Suite in a college classroom that made me weep, (and still does to this day). Lately, I’ve been listening to Anais Mitchell, who has such heart and honest lyric writing.  I also got Michael Franti’s new album and like dancing to it with my boy!

Q How do you approach songwriting: do you wait for the muse or do you show up daily with intent to finish (or get a good start on) a song?
SL As a young person I was inspired every day just by virtue of learning how to play the songs I loved, and playing them for hours. Then I started writing lyrics and singing my own songs, and again spent hours on end. As I got a bit older, I did wait for the muse with my songwriting, and seemed to be more interested in developing musical ideas and arranging. And now that I have less time, I want to be more economical with it, while at the same time wanting to dig deeper with my lyric writing. So I am aiming to start a new routine of writing daily, with a couple of days each week for longer blocks of writing time. As I’ve been getting back into it again, the more I do, the more I want to do, and so it’s building momentum.

Q What can listeners expect in the next year? Where will you be playing? Will you be releasing new recordings?
SL Well I’m so looking forward to performing with you and Monica Pasqual at Laurie Wagner’s house concert on Saturday Sept. 7th! And I’ll just see where it leads from there. I am working on several new songs and have some ideas for possible new recordings. My son came up with a great title for a song so I’m sure there’s a kids record in the not-too-distant future. And I’ve got this idea for a record of Lullabies for grown-ups. We could all use a little soothing from time to time, right?
Sara Lovell next performs at A Magical Garden Concert @ 27 Powers in Alameda, CA September 7, 2013 7pm. For tickets and information to A Magical Garden Concert in Alameda, go to http://www.27powers.org/; for more information about Sara, visit http://www.saralovell.com/
Posted by Bird in the Tree at 9:23 AM

Nice post. I learn something more challenging on different blogs everyday. It will always be stimulating to read content from other writers and practice a little something from their store. I’d prefer to use some with the content on my blog whether you don’t mind. Natually I’ll give you a link on your web blog. Thanks for sharing.
Leathers Athlete

I’m really amazed with your posting skills as well as with the layout on your blog site. Is this a paid style or did you modify it yourself? Either way keep up the pleasant quality writing, it is rare to see a great site such as this one these days.
Fido Markets