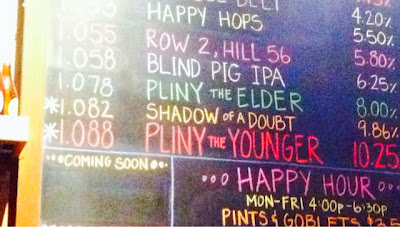 Rainy day here. Rainy days. As California basks in belatedly falling rain and snow, I'm happy to be warm at home, reading the Sunday paper, recovering from my venture into beer tourism.
I'm not a big drinker and, when it comes to alcohol consumption of any kind, I'm more apt to have a nice glass of red wine. However, my SO has a high regard for IPAs and enough interest in craft beer to brew up a batch at home from time to time. So when another friend who is likewise partnered to a beer lover invited us along to enjoy Russian River Brewing Company's annual release of its renowned Triple IPA 'Pliny the Younger,' we said sure.
As the event showed up increasingly in the press, it dawned on us that the Pliny the Younger release was a very big deal among beer drinkers. Expensive and time-consuming to brew, Pliny the Younger is considered one of the very best tasting beers in the world, but is only available at the Santa Rosa pub for two weeks each year (with very limited shipments elsewhere). People from all over the country (world?) — we'd meet a woman from Texas who flew in and got up at 5 in the morning to get in line — gather in Santa Rosa each February to consume the rich beer. And so I found myself rising early Saturday to join my friends and the gathering throngs to await our turn to taste Pliny.
The drenching rain didn't keep the crowds away and it was late afternoon by the time we were let inside Russian River Brewing Company.
Inside the brewery, it was nearly standing room only, shoulder-to-shoulder, elbow-to-elbow, as the capacity crowd toasted glasses and sipped on the golden ale.  The pub serves an extensive list of other highly regarded and artful brews, including Pliny the Elder,  all year, but it was Pliny the Younger's day.
"Are you leaving?" I asked a man getting up from an adjacent bar stool, hoping to secure more perches for my party.
"No," he said, looking at me aghast. "I'm staying 'til they close.
Eventually, we got a table to sip and further consider this year's Pliny over pizza and pub sandwiches.
Was it all that? I'm hardly the best judge, but I will say it was the smoothest, most drinkable beer I've tasted.

We're again participating in the RPM (write an album in a month) Challenge this month. I don't know this Ode to Pliny will make the KCDC 2.0 cut, but this is what appeared today:

Ode to Pliny the Younger

What you'll do for a fine craft beer
Why wait in the rain in a soggy chair
As Triple IPA is a strong and special thing
May alter your reality, may make you sing
Oh Pliny the Younger, you sneaky little thing

We stood outside though the rain did fall
What folks will do for rare alcohol
The cops came, the merchants swore
But we all bought T-shirts
From The Pliny the Younger store

Will you do it again? Some won't some will
Fly from all over to get their fill
Maybe if there's another sort of inebriation
Perhaps a quadruple IPA creation?