Of futurists and falcons

A former coworker told me his father was a futurist. "You should look him up when you're in Austin," he said. This was a while ago now, close to a decade ago, when I was thinking of moving to Texas. I'd sometimes house-sit for a friend and live there for an odd week or 10 days at a time. So I did look him up, the futurist, and he took me to lunch.
He assured me that it was good to like a do a bunch of different things, so you don't get too attached or over-invested and get devastated when if something doesn't work out quite as you envisioned. I don't know if he was right, but I still take comfort in his words, especially on days which find me alternately in a yoga studio, writing a song at home and standing under a tree looking through binoculars as a couple of falcons wheel and turn in the sky.
One of my long-held passions are raptors and their conservation, a potential career path deferred decades ago to follow other threads of interest. Wednesday I drove to one end of Alameda to join a motley crew of bird lovers who knew a biologist was going to show up at 10:30 to band three not-yet-fledged peregrine falcons being reared on a local railroad bridge. Binoculars in hand and peering through spotting scopes, we settled into watching the biologists and a photographer as they ascended the tower and the parent falcons went berserk over the intruders. 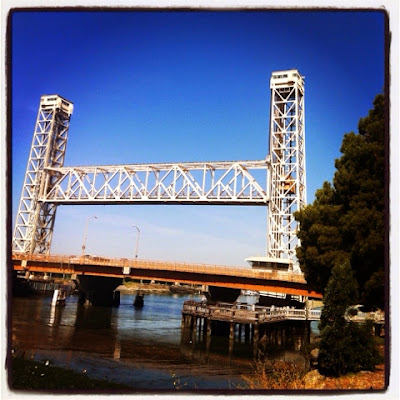 While we had an amazing view of falcons in flight, after a few minutes, it got uncomfortable watching the parent falcons flying themselves to near-exhaustion, careening back and forth in front of the trestle, cacking in the rising heat, following their instinctual drive to protect their young. I nearly started crying out of a helpless concern. At the same time, I was impressed with their vigilance. They tired but they didn't give up, taking rests and tag-teaming their assaults on the hard-hat wearing biologists.
Persistence is why peregrines are still here. After being nearly decimated by the affect of DDT in the 1970s, an intrepid network of falconers, biologists and bird lovers in tandem with the tenacious if endangered species worked their way back from the brink of extinction.
Futurists "explore predictions and possibilities about the future and how they can emerge from the present." Amid melting snow caps and my own doubts, I appreciate a good recovery story, which these falcons, once so threatened and now nesting in back of grocery stores and in city centers, symbolize to me.