It wasn't that big of a surprise to see last week's East Bay Express feature a story about  'Living Room Stages' on its front page. The rise in private, alternative performance spaces is a phenomena we're well acquainted with and greatly applaud, both as performers and audience members. Some of my favorite shows this year have been at non-traditional spaces (Treebones, Self & Soul Center, The Monkey House) and two of the three performances I saw this past weekend were in alternative spaces. Friday night was all about an Alejandro Escovedo (!)  house concert in SF, while Sunday afternoon was occupied with All Terrain Theater's annual showcase 'Women in Solodarity,' likewise in a private Berkeley space.
The audio experience in each was pristine and the audience well-mannered and intimate — folks mingled pre-show and during intermission and listened attentively during the show. In other words, the experience was completely about connecting to the artist and the work and the community.
I felt extremely privileged to get to see and hear Escovedo with about 75 other avid listeners at the KC Turner presented show. KC is a tireless house-concert producer (and music presenter in general) and the Escovedo show was a real coup. In a revelatory hour-and-a-half of music, Escovedo sang a selection of his songs representing the breadth of his career, from 5 Hearts Breaking to Chelsea Hotel to San Antonio Rain to Sabor a Mi.  In between, he discussed the genesis for each song as well as his early days in punk rock, his family's move from Texas to California, his evolution as songwriter, and touring, going on the road "with $50, a roasted chicken and a bag of weed." The audience, needless to say, hung on every word.
Escovedo himself is new to the small, solo house show experience but said he enjoyed the relative ease (no band and extensive gear to worry about) and planned on doing more.  Lucky us! 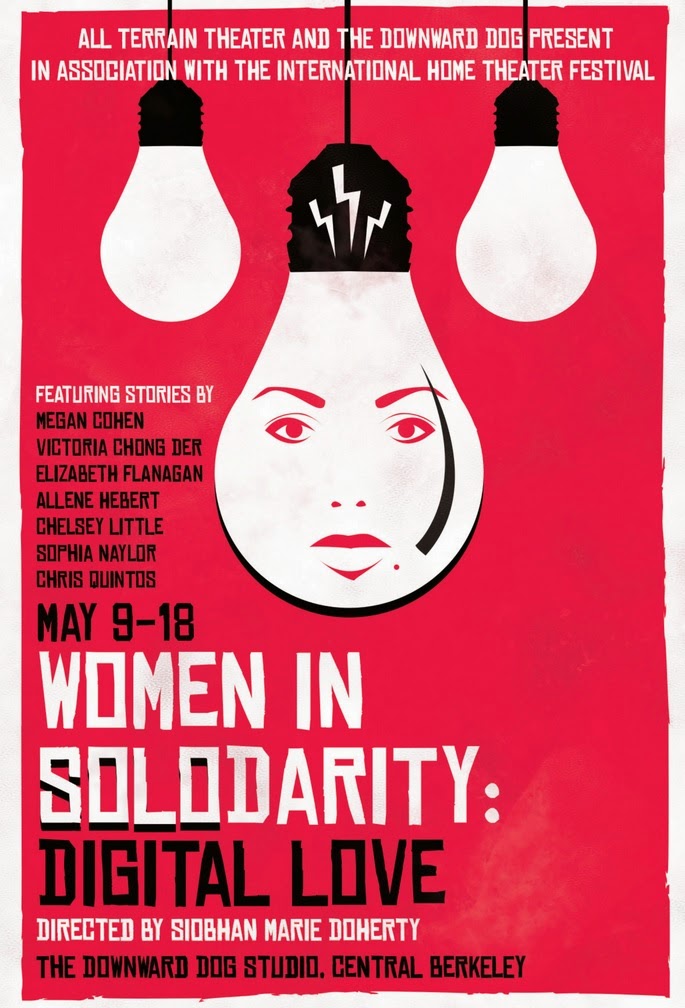 While I've seen plenty of musical house concerts, I'd yet to see a professional play in a private residence until Sunday. A friend, playwright Elizabeth Flanigan, had a short in this year's All Terrain Theater's showcase, the theme of which was "Digital Love."  All Terrain "specializes in presenting theater in non-traditional spaces, including a baby store, residences, laundromats, a record store, and traditional theaters" and Sunday's juxtaposition of venue setting and theater subject was noteworthy in itself. The show's venue was a converted downstairs in a private Central Berkeley home, while the showcase's theme called for seven different solo shorts depicting scenes about our often conflicted relationship with technology and the Internet. The playwrights covered a lot of online terrain: a woman addicted to her iPhone, another mulling the knowledge of Google, troubling aspects of surveillance, the damage done by drones and the convenience and pitfalls of online dating. Well-written and well-acted, I left both wanting to unplug that much more often and go to more theater.