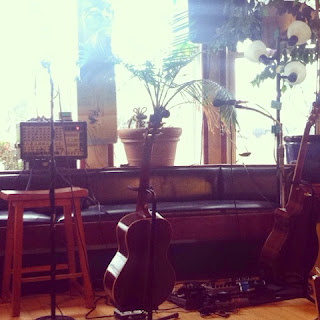 The latest super moon kept me up half the night after a full weekend of shows and teaching and socializing, which found me driving a hell of a lot. Part of this was great — notably, getting out  to the coast on Saturday for a brunch-time gig (if I looked over my left shoulder I could see the Pacific. Coastal beauty = happy making). But driving in the city has been nutzo. Regular crazy cell phone-using drivers coupled with Outside Lands rabid concert-goers has necessitated extra vigilance. I know I react to aggressive driving more now that I live on an island where the speed limit is 25mph.  Not everyone is holding to that limit here, but even if you're speeding, you're likely not going much faster than 35mph. (And if you are going faster than that on these roads, you do deserve that big ticket).

Likewise, I think there's some genetic influence at play.
My dad drove exceedingly slow in his later years. Trips to town entailing put-putting down the road in his Datsun pickup truck, one elbow out the side window taking in the view: the rows of apple trees filling the orchards along Corralitos Road, who was convening at the local market, oblivious to any cars riding his bumper.  His slowness exasperated me then. I was a teenager,  embarrassed by my dad's driving especially as more than one friend let me know how they'd been 'stuck' behind my dad as he cruised along.'

Clearly the years have mellowed me. (I choose to live  in a place where the speed limit is 25mph!)   I'm not near the age he was of this memory (I'm closer to the age of my dad when he had me), and I had to answer so many questions myself,  but like so much of my dad's useful knowledge, I've appreciated it more with time, see the wisdom in his slowness and taking time while he could. Dad would have been 89 this past Friday. He's not alive for me to tell him I get it now, but I'm glad I can credit him where some credit is due.

In a Landscape: I By John Gallaher

“Are you happy?” That’s a good place to start, or maybe,
“Do you think you’re happy?” with its more negative
tone. Sometimes you’re walking, sometimes falling. That’s part
of the problem too, but not all of the problem. Flowers out the window
or on the windowsill, and so someone brought flowers.
We spend a long time interested in which way the car would
best go in the driveway. Is that the beginning of an answer?
Some way to say who we are?


Well, it brings us up to now, at any rate, as the limitations
of structure, which is the way we need for it to be. Invent some muses
and invoke them, or save them for the yard, some animus
to get us going. And what was it Michael said yesterday? That
the committee to do all these good things has an agenda to do all these
other things as well, that we decide are less good in our estimation,
so then we have this difficulty. It just gets to you sometimes. We have
a table of red apples and a table of green apples, and someone asks you
about apples, but that’s too general, you think, as you’ve made
several distinctions to get to this place of two tables, two colors.
How can that be an answer to anything? Or we can play the forgetting game,
how, for twenty years, my mother would answer for her forgetfulness
by saying it was Old-Timer’s Disease, until she forgot that too.


On the television, a truck passes left to right, in stereo. Outside,
a garbage truck passes right to left. They intersect. And so the world continues
around two corners. The table gets turned over, with several people
standing around seemingly not sure of what comes next. Look at them
politely as you can, they’re beginners too. And they say the right question
is far more difficult to get to than the right answer. It sounds good,
anyway, in the way other people’s lives are a form of distance, something
you can look at, like landscape, until your own starts to look that way
as well. Looking back at the alternatives, we never had children
or we had more children. And what were their names? As the living room parts
into halls and ridges, where we spend the afternoon imagining a plant,
a filing cabinet or two  ...    because some of these questions
you have with others, and some you have only with yourself.
Posted by Bird in the Tree at 11:23 AM