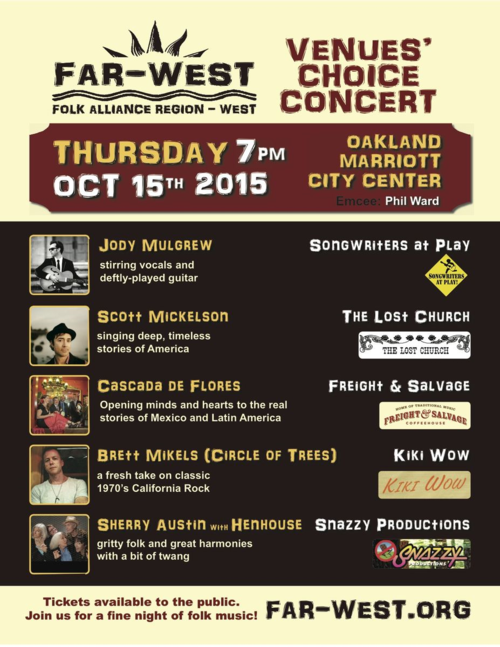 On Thursday evening, October 15, FAR-West will kick off its 12th annual conference with the Venues’ Choice concert. Five venues from around the region, dedicated to presenting acoustic music year-round, will each present an artist(s) of their choice. The diversity of styles represented are indicative of the broad range of expression that makes the West such a rich cultural melting pot. FAR-West's opening night concert is always one of the highlights of the conferences and 2015 is shaping up to be another great night.
Public tickets ($15) can be purchased at the FAR-West Brown Paper Tickets site.
VENUES' CHOICE CONCERT Thurs, Oct 15, 2015 at 7pm Oakland Marriott City Center 7:00 PM
Posted by Bird in the Tree at 1:00 PM

Thanks dear for sharing the information regarding FAR-West Venues' Choice Concert. It seems very interesting. I would like to see some videos from this concert. Well, at some popular San Francisco venues I am also going to attend a concert on Christmas night. I hope I’d have great time with my family over there!