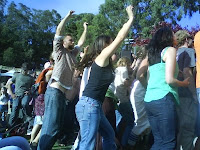 The fact that the show that is Hardly Strictly Bluegrass Festival went on for the 8th year running in Golden Gate Park this weekend amid our financial and political cluster-f*&# err, 'climate,' spoke volumes to the power of music. The fact that the event — featuring the best Folk/Rock/Americana/Bluegrass/NewGrass and songwriters — is funded by one of the more successfull, private equity investors, Warren Hellman, proved the wisdom of staying hopeful no matter what the circumstance. Due to the non-monetarily related riches of an over-busy weekend, I managed only one day of the event this year, catching wonderful performances by Bonnie 'Prince' Billy, Greg Brown, Iron+Wine, Ricky Skaggs & Kentucky Thunder and the crowning jewel of the festival Emmylou Harris (and this wealth of music meant missing Elvis Costello, Pegi Young and Iris Dement just to mention a handful of all of the acts that played). Sitting with neighbours, friends, and new friends from near and far (Humboldt, Sacramento and Ireland being among the show immigrants), listening to fine, fine music, most people had a hard time keeping still for long (to whit, this photo during the Skaggs set of old songs done fast and blue). Hellman, introducing the final act Harris and thanking the crowd, has become a local hero for his annual gift to the city (According to the Chronicle, he's 'consulted with his family' to make sure the show has funds to go on at least 15 years following his passing). And while he himself alluded to the fact that it wasn't the best time to be in his line of work, he's learned banjo amid making all that money. Fittingly, Emmylou called him up to sit in to play on the last song of the day (her set drew evenly from her last three albums with a few oldies such as "Two More Bottles of Wine" thrown in, while I'd call her current backing band the middle road between Spyboy and her Hot Band), as half of San Francisco walked toward points home through the park, happy despite the troubling times.
Posted by Bird in the Tree at 10:09 AM