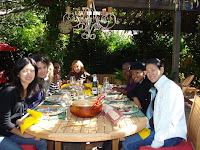 Amid all the music imbibing last weekend, I enjoyed a wonderful lunch with a great group of smart, creative, women friends. Nourishment for body and soul was had amid a crazy time. A photo of the spread, @ left. Two days later, I caught up on India in prep for my upcoming trip with Tracy, whose work with Operation-Shanti continues to help out those in dire need. At the same time, two of my co-workers will be among the volunteers taking more action at a benefit for breast cancer on Thursday, here in San Francisco at 111 Minna. "Beats for Boobs" puts a dance and fashion face on a sobering issue. All proceeds go to Breast Cancer research (btw its Breast Cancer Awareness Month).
Finally, I've been checking out a lot of media coverage of both the election and the economy. One of my fave reading has been Erica Jong's Huffington Post column. Read her hilarious/harrowing bit on the latest debate and laugh and cry at the same time.
And then Tina Brown is back at it again! This time taking on the internet with The Daily Beast. I'd love if she and Hillary had a for-the-record chat soon (evidently she's writing a book on the Clintons)...
Keeping it even is The Women's Media Center:
"In this presidential cycle, female broadcasters have dramatically shaped the public’s perceptions of the candidates for president and vice president. Several women have played prominent roles in broadcasting news in this election, including the vice-presidential debate moderator Gwen Ifill, MSNBC show host Rachel Maddow, NBC’s Andrea Mitchell, and CNN political correspondents Dana Bash and Candy Crowley. Two powerhouse women broadcasters—Oprah Winfrey and Katie Couric, with an endorsement and a series of interviews respectively—may in fact, shape its outcome."
Posted by Bird in the Tree at 2:22 PM

Thanks so much for coming out to support the breast cancer fundraiser last week!