We went in more for the tried and true — Chuck Prophet, Peter Case, Alabama Shakes, Barbara Lynn & Alejandro Escovedo & His Orchestra — rather than the shiny and new acts in listening department yesterday. Chuck Prophet is completely on, rocking the Ginger Man Pub's crowded back patio with songs from his new CD "Temple Beautiful" before going on to play about a half dozen more gigs around Austin. I knew a couple of Case's tunes  but went more on the recommendation of friends and was reminded upon entering the packed club that he was in The Plimsouls. You know "A million miles away...." The sheer density of music happening on 6th street gets a little too oppressive for my tastes and once again, we found our way back to Austin's South Congress District. Austin's eminence grise,  and one of my favorite musicians,  Alejandro Escovedo would be performing with his orchestra to close out the evening at SX San Jose and he had two amazing 'openers.' Alabama Shakes are a newish band with old souls and major pipes. And while they are just debuting their first CD in April, but they've been riding high on the success of a single "Hold On" and it was another crowded if satisfying listening experience. But the next act, unexpected to me, was the real highlight of the day. R&B pioneer Barbara Lynn has been playing music longer than I've been alive. She's had her tunes covered by The Rolling Stones, toured with B.B. King, and is one of the best female lead guitarists I've ever seen play. Finally, Alejandro came out to his overjoyed hometown crowd, performing a hard-driving set which included a couple slower songs including a gorgeous new song "San Antonio Rain," co-written with... Chuck Prophet! And how can you not love a guy whose encore is "Rock the Casbah"? It was a great day of music. Some scenes from Austin, March 16, 2012: 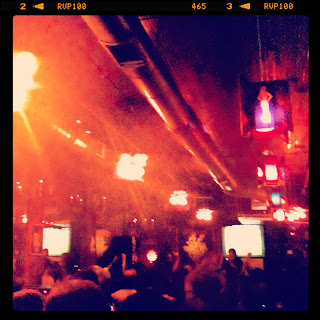