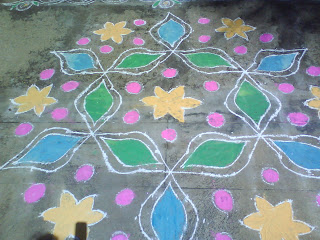 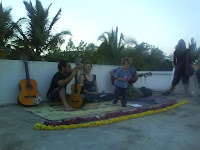 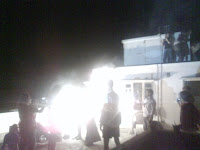 Being in India isn't rational, but that's the point, or rather the draw. As I remember from my last visit, everything that's on top in the US is hidden here, and things that are hidden in the US are visible in India. Think linear vs. circular. Western brains are oriented around the 'I'; Easterners, the collective. Traffic doesn't really ever come to a stop here. Temples open at seemingly random times. Coconut sellers rise with the birds, yelling 'cocoaaaaaa' up and down the street, while beggars tug at your sleeve in the wealthiest part of town. The locals paint delicate mandalas in their driveways while their children blow up as many firecrackers as possible a few steps away. And Americans, Europeans and South Americans and others from all points of the globe who love this contradictory environment find there way here to study yoga.
Still we haven't forgotten the rest of the world, notably the election next week. This morning, I had breakfast with fellow practitioners from Italy, Denmark and Germany. "How could Obama not be elected president?" they wondered. I feel the same, I told them, attempting to explain that California mind differed quite often from the rest of the US.
To whit, while I've been in India, Susan Ives has been stomping for Obama door-to-door in New Mexico "Obamamos!" she writes, detailing negotiating mean dogs and less than hostile 'undecided' voters. She also shared this link to a pro-Obama song some 'local converts.'
Speaking of songs , the yogis gathered for an evening rooftop mini-show and firework display by another singer/student set to leave. Wednesday in Mysore was officially the last day of Diwali and that meant the most firecracker activity yet and the enthusiasm rubbed off on the yoga community. Let's just say fireworks are not regulated here. Small children are running around with explosive devices capable of extremely loud displays and anyone can buy them. The walk back was landmine-esque.
Back to action, conversations, inspiration and activism collide on The Brave Nation.
Posted by Bird in the Tree at 10:36 AM