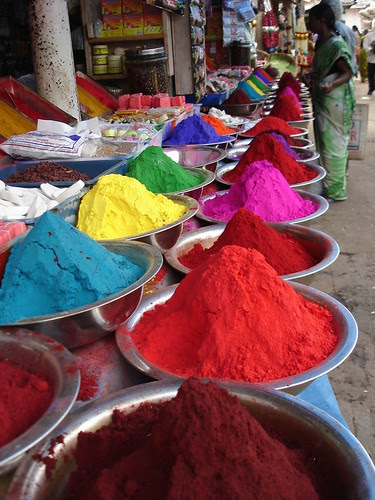 "Where are you from?" is generally the second question you get asked in Mysore past your name.
While most of the other foreigners say 'Italy' or 'Brazil' or 'Japan,' etc., without thinking about it, I say 'California.'
"Better to say California than the US!" opined Latvia from Sweden this morning. We both laughed but her remark was telling of the general attitude toward America among my fellow AYRI yoga students in Mysore, a diverse, cosmopolitan population of approximately 200 visitors, among whom Americans are a minority. And I haven't met one Brazilian, Italian, Brit, Aussie, Japanese or Indian who doesn't hope we gringos get our collective act together and vote Obama into office. Fortunately, I can report the Californians, Floridians, D.C.ian, and Vermont residents among the group already voted Obama via absentee ballot. We'll be trying not to hold our breath as we watch from afar.
Posted by Bird in the Tree at 10:46 PM

LOVE the photos! Can't wait to come back and read your entries after I've had a good night's sleep. I'm home from La Habana. Hope you're having a great time, Deb.