Karen Hildebrand: The Newness of "The Old In-and-Out" 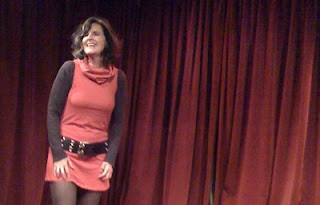 I first met poet, journalist and editor Karen Hildebrand 10 years ago at a writing workshop high in the Colorado Rockies. A few months later, I re-met her in San Francisco and have been keeping up with her work ever since. Now boasting credits in Fourteen Hills, Southern Humanities Review & Slipstream (among many other publications), her two-woman show "The Old In and Out" premieres at the Bowery Poetry Club in New York (where she now lives & works as VP of editorial for a publisher of dance magazines) on January 11, 2009.

DC You've a new performance piece. Can you talk about how your poetry evolved into a stage production?

KH It helps to be friends with theater people. "The Old In-and-Out" was my friend Kat Georges' idea. She published my poetry chapbook, One Foot Out the Door, and knows my body of work. Then she heard Madeline read her poetry. Kat called me up and said there's a poet whose work is amazingly compatible with yours. Would you be interested in doing a two-woman show? Of course, I thought she meant some kind of joint reading.

DC What has been challenging? What has kept you going?

KH The easy part was meeting Madeline and falling in love with her work. Kat suggested that each of us show up with narrative poems—maybe some that involve a man—and we'd see what happened. We ended up with some 20 poems that formed a narrative arc. Kat put them into an order and Madeline and I each wrote a couple of new things to fill in gaps.

It wasn't until maybe the third rehearsal that it dawned on me that this wouldn't be a poetry reading where I could hide behind my reading glasses and a piece of paper. I would have to act.

I was intensely uncomfortable with that. What Kat wanted me to do felt like miming my lines. I thought it trivialized the work. So she lied to me. She said we had to start by exaggerating and later the pantomime would drop out. Well. Not only did the mime not drop out, but the gestures and movements got larger and now I'm doing characters in different voices.

I'm still intensely self-conscious, but we're way past the point of no return. I have to forget myself and do my best for the good of the work and my partners. I can't let my partners down.

DC How does your work change (or not) knowing you'll be performing it?

KH When I'm selecting work to read in public, I go for what's easy to hear--language people can get on first reading. Colorful imagery, story telling. Some humor. And then there's always the poem you remove from the stack when you see your boss is in the audience.

But for "The Old In-and-Out" I was simply thinking about what poems would be a good match for Madeline's in subject or tone. Kat suggested changing a word here and there or adding a line for better rhythm. We decided early on to remove the titles because it interrupted the flow.


I think that none of us realized the full dramatic potential of the work. Maybe Kat did--she's a gifted theater director. She saw parallels and possibilities in our work we didn't know existed.

DC: Can you tell what the dramatic impact of the piece is for the audience? Is this piece hopeful or?

KH There's definitely a dramatic arc--not as pronounced as a more traditional play, or a movie where every emotion is manipulated by music or visually. The play is about the search for love on one's own terms. What these two particular women seem to find is loss and disappointment. They do find resolution. Is it hopeful? I hope that's what comes through. I hope our audience feels the impact, but it's subtle--this is poetry, after all, and not slam poetry that gets a crowd all worked up. But we haven't yet performed the entire piece for an audience, so I really don't know.

DC Is your poetry writing process or approach changing as you work on this theater piece?

KH I still face writing in the same way--trying to describe an image or an experience in an evocative way. It's all about getting words onto the page and how they look on the page. What's changed is that I'm a better reader. I'm more comfortable in front of a room and I'm able to modulate my voice better.

DC Who or what/where do you look to/go to for inspiration?

KH For me the act of writing poetry is where it's at. Time disappears and I make amazing discoveries. Performing--even if it's only a reading behind a podium--requires something completely different.

The actor Anthony Zerbe once staged a poetry reading at Theater Artaud in San Francisco. I was completely taken with the dramatic possibilities. He gave a workshop the next day--ever since, I've wanted to be a better interpreter of my own work. But for me the performing is all in service to the words.


For "The Old In-and-Out," I think of Meryl Streep. I heard her read poetry once and it came to life--the way her eyes sparkled and her face glowed. Wouldn't it be great if like Eve Ensler's "Vagina Monologues, -- by the way got its start at Cornelia Street on the very stage where we performed "The Old In-and-Out" in December-- Meryl Streep were to eventually take over my part?
Posted by Bird in the Tree at 7:31 AM