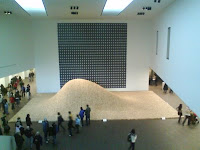 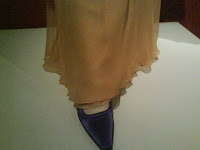 "Instead, what I try to do is — for two to three months — read, research, understand anything about the site. And I don't just mean the physical site. I mean the cultural site, the historical site, who's coming, what the needs are, what I think needs to be done. " — Maya Lin, Interviewed in The Academy of Achievement

The lines were long at both Cal Academy and the De Young today, but given the rainy weather and holiday-induced museum crowd, the Systemic Landscapes exhibit by Maya Lin was relatively uncrowded. After going heel-to-toe with other viewers through the impressive (and popular) retrospective of haute Yves St. Laurent couture gowns, suits and cocktail dresses, my sister and I made our way past Lin's 30-ton "2 x 4 Landscape" sculpture and further downstairs to view her meditations on bodies of land and water. The artist and architect most famous for designing the Vietnam Veterans Memorial has deeply scrutinized everything from inland seas to endangered watersheds and reiterated land and water forms in plywood, wire, plaster, eviscerated world atlases and pencil. I used to love backpacking in the Sierra and Colorado Rockies as much for the reason it gave me to pour over topographic maps — walking through Lin's exhibit felt like inhabiting those cartographer-rendered contour lines in yet another plane: neither natural nor urban, but something else altogether equaling Lin's very personal blend of art, architecture and cartography. It certainly made this viewer long for the real thing, which I took to be the real subtext of the work: a call to remember land and water before it's too late.
Posted by Bird in the Tree at 6:44 PM