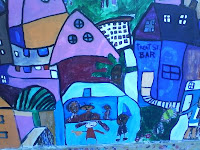 A year ago, I really didn't know what Twitter, a microblogging community & communications tool that let's you update your status via text message or computer, was all about. Nor did I think I'd ever use it. Then I went to SXSW where figuring out what show to attend, who was playing & what show was sold out was nearly a full-time endeavor, and got into Twitter big time (granted I was with a lot of super-techies who'd just been at the Interactive part of the fest), sold on its speed & efficiency at conveying news. I really became a fan when I used it to get real-time, real-people updates on the coordinates of Santa Cruz fire last summer. Sure, like any blogging/social media tool, a lot of junk info gets Tweeted, but Twitter, in general is great for getting information , finding like minds and building community. To that end, I'm happy to be a part of this week's Twestival, a global "Tweet-Up" that is bringing people together to raise funds for Charity Water. I think it combines the best attributes of Twitter: uniting people and giving them real and useful information to help them take action. Twestival is happening in cities all over the globe, and Twestival SF takes place at the Paradise Lounge, 6-10pm on February 12. There's going to be a whole lot of entertainment, drinks, art auctions, and a set by me and the band. If you're in the Bay Area, come on down! If not, check the Twestival site to find out if there's a Twestival in your town. And if you're on Twitter, you can follow both my updates (@DeborahCrooks) or the event's (@twestivalsf).
Posted by Bird in the Tree at 12:16 PM

Is the blue artwork yours?