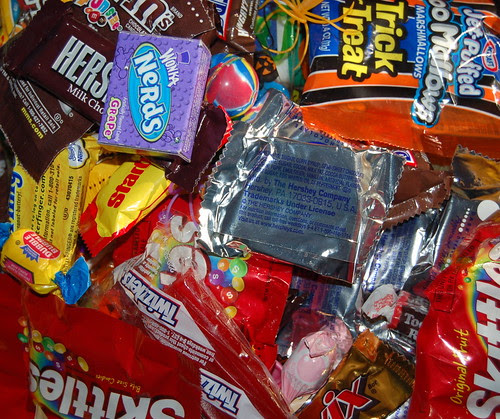 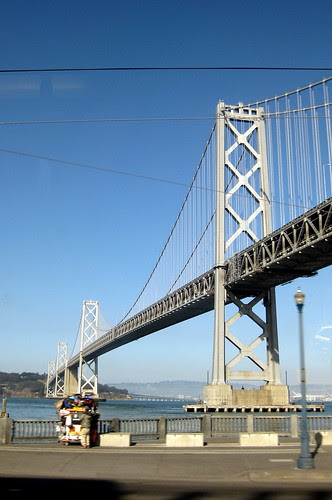 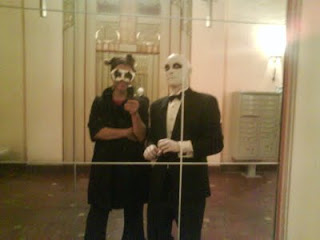 Arriving back in the Bay Area a couple of hours after a cable snapped on the Bay Bridge set the tone for a week of snafus. Friday, an unfortunate oil spill on the Bay compounded by the closed bridge and also Critical Mass, the logistics of gear transport & travel, made getting to a small gig impossible. Yuck. I hate canceling things.
Nonetheless, being 'stranded' in San Francisco on Halloween weekend isn't such a bad thing if you're feeling off-kilter. The streets were packed with costumed cyclists and bars were filling up with the after-work Friday crowd. The sight of strolling Elvira's, zebras on roller skates, bumblebees at intersections and naked men (classic SF) on two wheels may reflect one's crazy quilted fun house of an internal landscape a little too accurately but it also whispers 'you are not alone.'
So even if I was feeling somewhat thin-skinned on Saturday, I pulled together a jester-esque look as a costume to to to Dave's party amid dog-walking, baking and listening to NPR. I just happened on a rebroadcast of This American Life titled "Break-Up" which I'll recommend to anyone who hasn't quite mastered the stable long-term relationship. One of the segments featured a writer, but non-songwriter, Starlee Kine, who decided to write a song to help her through a break-up. She enlists Phil Collins for help (his song "Against All Odds" had been a hallmark of her relationship) and the result is a sweet tale of the therapeutic benefits of writing through heartbreak as well as the process of songwriting. "Is it better to have the song in the end or the relationship?" Starlee asks Phil, who paused before replyling: "Well it's better to have the relationship...but sometimes you don't have a choice."

Is it any surprise that I spent much of the Halloween Party talking to another songwriter?
Posted by Bird in the Tree at 11:55 AM