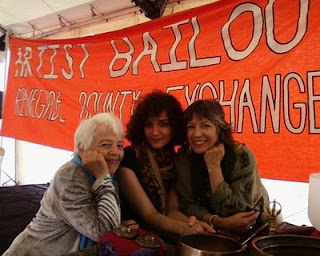 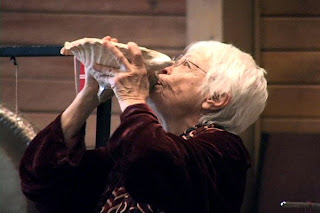 Knowing of my interest in and practices of singing, yoga and chanting, writer Andrew Gori tipped me off to the work of filmmaker and yoga teacher Laura Bouza. Bouza, a graduate of the California Institute of the Arts in film with several documentaries under her belt, had completed much filming of "Gaia Mama: A Sound and Light Portrait" about sound healers, Florence Riggs and Kabbalah Bach. Bouza discussed her work amid completing production of 'Gaia Mama' and readying for a screening of her 2007 short "Naomi & Irving" at San Francisco's New Nothing Cinema


Q How long have you been working in documentary form? How do you choose subjects?

LB I’ve been working as a filmmaker/media artist for the past decade. Every film I make has its own life force, so to speak, and I choose its form accordingly. For the past four years I have been leaning more towards documenting people. The subjects I choose usually correspond with a desire to learn about someone or something. My work often takes a keen interest in the body, movement and the everyday practices performed by people.

Q Can you discuss more about your interest in 'haptic nature of perception?' Are you a dancer and/or have you done any other somatic work?

LB I am interested in the idea and practice of using the sense of touch to communicate information. Touch as an articulation that moves beyond words or images or sounds. Touch as primary sense, primary instinct. I grew up dancing. My grandmother was a dancer and always encouraged me to move in whatever ways were instinctual to me. This process, or encouragement rather, has moved into the way I approach filmmaking; I let the films move in ways that are instinctual. I also have a strong interest in somatic explorations. I practice and teach yoga. As I became more serious about filmmaking I had a desire to keep my artist identity separate from my yoga identity. More recently I’ve been attempting to bring these disparate selves into one. I see practicing yoga and making films as extensions of a spiritual practice.

Q Discuss your latest project, on sound healing. What attracted you to the work? Are you familiar with chanting practices and applications?

LB The work of sound healers attracted me for a few reasons. First, I am interested in alternative healing modalities and get a lot out of learning about different ways to approach health and healing in the body. Secondly, I am moved by the work of the two women who comprise Gaia Mama, Florence Riggs and Kabbalah Bach. Their practice and passion inspired the film. Moreover, I’m interested in tracing how their sound practice has evolved as individuals and together as healers.

In terms of chanting practices and applications, I am familiar with chanting in a yoga context but I’ve yet to explore chanting in other forms and practices. In many ways this film is about the exploration of the unknown. For myself it’s a way to investigate that which is foreign to myself and in a broader context it seeks to bring light to a healing practice that is both powerful and subtle. The film will most likely raise more questions than it answers, seeking to extend a sense of curiosity about the potentials and means of healing.

Q Who are your main influences, film or otherwise? Whose work do you love, look to for inspiration?

LB I am highly influenced by écriture feminine writers Hélène Cixous and Luce Irigaray, drawing inspiration and curiosity from the notion of writing the body, woman’s acute sense of touch, and how this translates to film. The films of Agnès Varda, Chantal Akerman and Catherine Breillat have been a great influence. Claire Denis’ film Beau travail, in particular, is a favorite. Other influences include American Avant-Garde filmmakers Yvonne Rainer, Chick Strand, and Su Friedrich, among many others. The performance work of Dean Moss, Anna Halprin and Margie Gillis have been highly influential as well as the photographs of Cindy Sherman and Robert Frank.

For more information about Gaia Mama or Laura's films go to http://www.laurabouza.com/ or or contact Laura directly at laurabouza@earthlink.net.

Photos, top: Laura Bouza (c) with Kabbala Bach & Florence Riggs in May, 2010; bottom photo: Kabbalah Bachof Gaia Mama.
Posted by Bird in the Tree at 10:48 AM