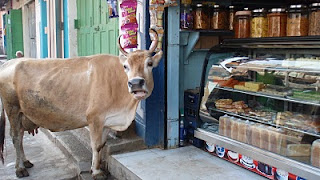 'Holy Cow!' my mom used to say when I was growing up in reaction to surprising sights or news. A raised-Catholic, meat-eating, first generation American daughter of Croatian immigrants, she may have picked the phrase up from 1950s broadcaster Phil Rizzuto, who evidently popularized it. My mom wasn't much of a baseball fan either (to my knowledge), but she would have been a young teenager in SF when Rizzuto was at the height of his work and I do know the radio figured largely in her early life. I recall stories of her family listening to the radio during blackouts in the 40s during World War II. Even when I was growing up, she would regularly sit at the counter with her coffee and news radio, ear tuned to the voice coming over the airways, often muttering 'holy cow' in reference to what she heard, an unconscious prayer for the world, perhaps, as much as it was an expression of surprise. She certainly never made it here, to India, where cows are sacred and thus familiar members of the landscape. Having been here a few times previous, I'm no longer surprised by being stalled in traffic that awaits a slow moving herd or having to change my course on a sidewalk to await an ambling heifer. Rather, cows are equal parts an endearing reminder of my mother, who I have no doubt would have loved some of India's incongruous-to-the-Western-mind everyday scenes, and reminders of the sacred to be found in the mundane.

Thanks Sal! Love to you & yours :D