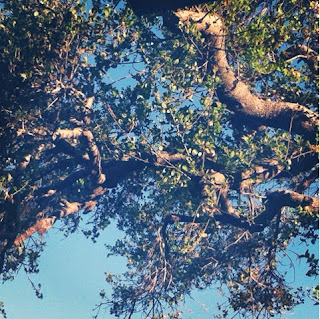 Seemingly out of nowhere this week, I came down with a 24-hour-ish bug and ended up canceling two-days worth of my oh-so-carefully made plans. Poof! I didn't go out of the house for a day and (mostly) unplugged. Kind of a drag and kind of a blessing at the same time. Today, everything was so vivid, the sun coming out after rain rendered the sky that much more blue, sprouting seedlings in the garden that much more green, that I felt grateful for the enforced break from it all. It's really easy for me to get busy, to try too hard, to try to figure it all out now, when the truth of the matter is I only have a certain amount of control over events.  The benefit of getting sick is how easy it makes it to stop — thinking too much, doing too much, whatever — and listening.  I'm reminded that surrender is not about giving up or giving in, it's simply about stopping the fight.

Read: Yay, it's national poetry month. There's a nice blog "A Year of Being Here" that features a mindfulness poem each day. One recent entry from poet Chris Forhan:

"Joy"
It seized me—never mind the circumstance: sudden
scent in the breeze like cinnamon, sun silvering
a roof as the unicycle parade began—it seized me

as sickness does, wholly, with no mercy,
all of my body obeisant to its law as though none of it
were mine, finally: not the joy or the body. —Chris Forhan

Eat: Caldo aka hot soup. There's a Mexican restaurant in town, Acapulco, that does a kick-ass version, either veggie or with chicken, and its all I wanted to eat while under-the-weather. Here's a veggie version from Food 52. Simple, good, healing.

Listen: My pal and life-long music eductor Sally, gave me David Sylvian's 'Dead Bees on a Cake' on cassette many years ago (it was first released in 1999). Today I got in the car after yoga and heard one of the songs from that record, ' Krishna Blue,' and recalled how great that CD was. I also remembered another song on Dead Bees that fit the day: "I Surrender."